Having an intimate examination can be uncomfortable enough, but the thought that a medical student might be examining you without your clear consent is hard to accept in 2011.Although Canada only introduced guidance that explicit consent from patients was needed for pelvic examinations  less than six months ago (and following much dissent in the press), in the UK and Australia this has been established policy for many years. But researchers from Cardiff and Dundee universities who were exploring UK and Australian  medical students 'professionalism dilemmas' found that the students often told stories of performing intimate examinations without consent. Sometimes they challenged being asked to perform an examination by a doctor-tutor, but more often the stories were of going along with requests despite knowing it was against their school's policy.
The researchers conclude that having a policy is not enough to change the behaviour of doctors who request students to practice examinations of patients without consent despite clear guidance which says this is wrong.
So where next? To try and quantify how common some of the professionalism dilemmas such as this are, the researchers are now carrying out a survey of all medical students in the UK which can be found here, and have set up a Facebook group to support the research. They also hope to study why the policies have not had the impact on doctor-tutors that would be expected.

Press Release from University of Dundee.

EDIT: Annabel Bentley has suggested that action needs to be taken. What do you think? 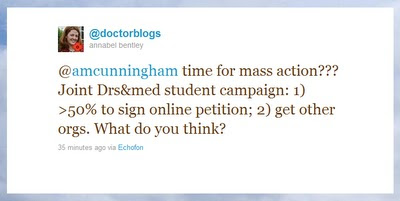 You can see some of the discussion about this on twitter via @storify here.

Edit 7/2/2013: This paper got a lot of press coverage especially in Australia. Here the authors, Lynn and Charlotte, respond to the media coverage of their research. There were shocked at the reaction and decided not to engage in the media storm. Right decision?

Posted by Unknown at 19:39 7 comments: Links to this post


A week or so ago I was listed in a BMJ Careers article as a "health professional to follow". That's quite an honour, so I thought I should write a short post to share my Twitter learning.


My first tweet is recorded here. It was on 27th May 2008 and was "preparing for a seminar on medicine and the media- thinking about health 3.0". I had just received an invitation to Twitter from a friend who works in IT. He has never quite got the twitter bug and I didn't for a few more months either.


Twitter was just one of the strategies that I chose to use to try and find (and develop) a community of people interested in medical education online. I had been to two medical education conferences in the summer of 2008 and I wanted to keep talking and sharing. My first move was to start this blog back in October 2008.(Lesson no1:  If you want to get the most out of twitter then start a blog. It doesn't matter if you don't write anything for months, you will have somewhere that allows you to share your ideas in a longer form. Twitter lets you find people but for real conversations and learning you need something that allows for  discussion and that is a blog.)


I started following two distinct groups on Twitter- those interested in learning and education, and those interested in health - much wider areas than the narrow field of medical education that I was first searching for. This has been a "good thing". Having a network which is diverse by interest and geography has maximised what I have got out of twitter. (Lesson no2: Don't just follow people like yourself on twitter. Diversify your network.)


I have tweeted a lot! But there are some things that I don't tweet about, namely anything that could break the confidentiality of the students I teach or the patients I care for. Now and again I mention something personal but rarely. I am aware that my tweets are there forever and I want to be comfortable with anyone from my mother to my boss reading them. (Lesson no3: Twitter is always public).


Lastly, twitter is good for bite-sized conversation. Don't try to make it do more than that. Tweet chats like #nhssm (NHS and social media) are good for finding people but unwieldy for learning. If you find yourself getting into a long conversation on twitter then you probably need to write a blog post instead! Then you will have the record of your thoughts and those who comment forever. Tweets can be hard to archive and find again. (Lesson no4: Twitter has limitations)

Posted by Unknown at 18:53 7 comments: Links to this post